Not that anyone needs an excuse to spend hours on the couch watching television, but over the last few months I’ve done two rounds of isolation and had a week at home with Bronchitis so I’ve definitely had more than my fair share of screen time lately – not to mention all the lockdowns we had here in Melbourne last year. So I thought now would be a good time to share with you the tv shows I’ve been binging and loving, I did a post like this last January but I’ve watched a lot of tv since then so here’s what I’ve loved just in case you need a few recommendations on what to watch next.

OUTERBANKS: Netflix
To call this an angsty teen drama is to seriously undersell it. It’s clever, fast and well-written and yes, very angsty. It follows a group of four teenage best friends who live on an island off the coast of North Carolina, a region known as the Outerbanks. The small town is steeped in history, including a historical tale of a ship that went down carrying $400 million in gold bullion. The group of friends spend their Summer holiday following clues and hints left behind in their search for the Royal Merchant, a hunt that has plagued their parents’ generation, and their parents before that. Imagine CSI Miami and National Treasure had an angsty teen together – this would be that. Season 3 is coming out later this year, and I genuinely haven’t been this excited for a television show to return in a long time.

THE MORNING SHOW: Apple
I loved the first season, but the second season has a whole different flavour. The first follows the cast and crew of a popular morning news program in the US following the #MeToo explosion that left one of their co-anchors chairs empty. It followed the consequences for men in media leadership after years of wrongdoing and the fallout, both publicly and privately, of such an ordeal. Although this storyline continues to feature in season two, we begin the season on New Years of 2019 about to welcome in 2020 and the shit-storm that that entails. Highly enjoyable, even though it’s a bit too soon in my opinion for a ‘covid’ show – this handles it thoughtfully and in an engaging way.

BRIDGERTON: Netflix
If, by some miracle, you didn’t watch the series last year when the Netflix production took the world by storm (and had us all falling in love with a Duke) now is an excellent time to get on board because season 2 is out in just a few weeks. Imagine Gossip Girl set in the 1800s in high society London; think fancy ballrooms and stunning costumes and quick-wit mixed with ye ol’ English. Smart, funny, sexy, engaging, mysterious, this show really does keep you hooked.

THE MARE OF EASTTOWN: Netflix
This is one of those shows that I immediately devoured in just a couple of days and now am genuinely jealous of people who are watching the American crime drama for the first time. The plot twists, the unexpected turns, the deep and challenged characters. The series follows Police Detective Mare Sheehan as she investigates the death of a young girl, almost exactly a year after another teen girl went missing. The town is populated with shady characters and with her personal life hanging by a thread it makes for seriously compelling viewing.

THIS IS GOING TO HURT: Binge
Based on one of my favourites books of the last few years, the series follows Dr Adam Kay, an obstetrician working on a maternity/gynecology ward in a London hospital in 2006. The show is very much a comedy-drama and definitely has a bit of dark humour and sarcasm, but it’s also a serious insight into the overworked and undervalued staff in our medical systems – a timely reminder after the past couple of years. Possibly not the best watch for someone pregnant or medically squirmish, it’s a no bars held look at childbirth – and all that it entails – but it still manages to be hysterical and heartwarming. I’m only a few episodes in, but I’m already loving it.
UPDATE: I’ve just finished the first season, and definitely don’t watch this if you’re pregnant, possibly soon to be pregnant or even remotely medically squirmish. I usually do okay with these sorts of shows, but phew, it’s a lot. Ace, but be prepared.

LAW AND ORDER: SVU: Binge
This show just doesn’t get old. I’ve watched some episodes a dozen times, others just a few times, but you just can’t go wrong with this classic crime and punishment drama set in New York City. At last count, there are over 500 episodes – meaning it would take you a little over 15 days of non-stop viewing to get through them all – so if you’re feeling that there’s nothing new to watch on streaming I’m suggesting this, easily one of my top five shows of all time, and it’ll be ages before you have to think about finding a new show to watch.

FRAISER: Binge
I’m very possibly showing my age here, but I grew up watching this series so when I’ve needed some comedic nostalgia over the last few years this is what I’m putting on. Funny, quick, great casting and the best characters. The show has aged a bit, but I’m still a massive Frasier fan, it’s my go-to when I’ve got a day in the kitchen and I want that perfect intersection of funny background noise that I don’t really need to concentrate on.

And because tv binge sessions require chocolate – I don’t make the rules, I just follow them – here are a couple of the recipes that I’ve been making on repeat over the past few months: 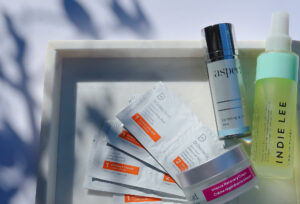 Four Expensive Products I Think Are Worth The Spend